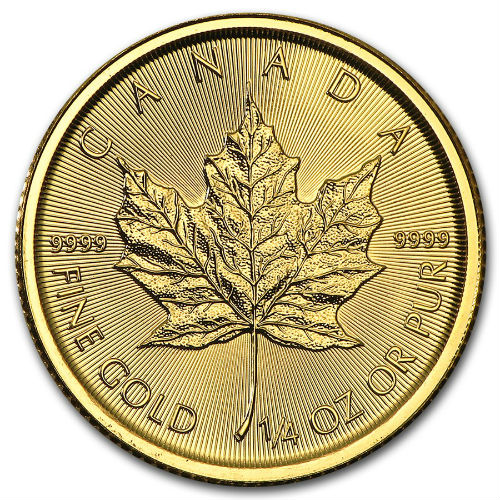 The Canadian Maple Leaf gold coin is produced by the Royal Canadian Mint, and is one of the most popular gold bullion coins available world-wide. Each coin contains 99.99% fine investment grade gold bullion.

Coins come in a plastic slip or in a tube, depending on the quantity purchased.

The Features of the 1/4 Ounce Maple Leaf Gold Coins

The Canadian maple leaf gold coin series is popular among investors interested in buying gold at low a premium price. The coins a reflection of the rich Canadian history and features the maple leaf Canada’s national symbol since early 1700s. The maple leaf coins were first introduced by the Royal Canadian Mint in 1979.

From the time the maple leaf gold coin was minted, the coin has never undergone any major changes in design. The coin has maintained it simple yet elegant design that features a maple leaf on the back. Indications for purity and the word “Canada” is inscribed along the large leaf. The Canadian Mint guarantees the authenticity of the coin with a laser micro-engraving. The laser inscriptions are altered every year but the mark always bears the last two digits of the year the coin was produced.

The Royal Canadian Mint has been in operation since 1911 and is one of the most respected refineries for gold and silver coins. The mint also produces gold bars and other custom gold products. The coins and bars from The Canadian Mint have had a fineness level of .9999 since the mid-1960, but this record was broken in 1998 when the refinery produced gold coins with purity levels that reached “five nines.”

The maple leaf coin is also available in silver, platinum and palladium.