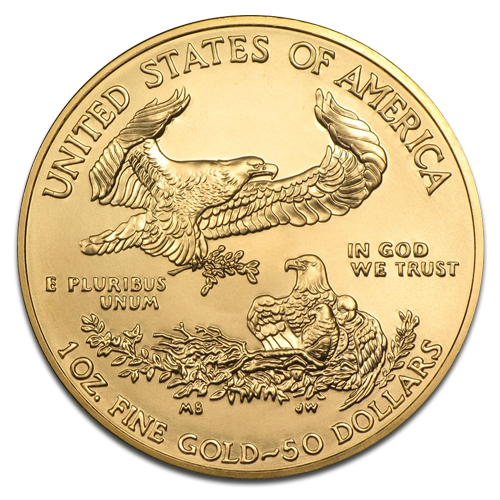 Each of these premium quality gold coins sports an image of Lady Liberty on the front, alongside the date of the year the coin was minted. Swathed in flowing robes and clutching an olive branch in one hand while guiding the way with her torch in the other: this coin depicts her as statuesque in her beauty and this is the perfect image of the Lady Liberty herself. The sun rises behind her adding the final touch to the classic image of strength and stability.

The American Eagle coin is minted in honor of America’s official bird – the Bald Eagle. The reverse side this iconic American Eagle coin sports two eagles. The male is in flight approaching his nest while the female protects the nest and the hatchlings. It is this image that gives the coin its unforgettable name. Also on the reverse of this coin you can find the weight, the fineness and the face value of the coin. The 1 Oz Gold Eagle coin has a face value is $50 US however this is not representative of its true value – the gold Eagle trades at a small premium over the spot gold price.

Each American Eagle coin contains exactly 1 troy ounce (or 31.10 grams) of gold. Coins sold by Swiss Bullion are sealed inside a plastic slip for added protection. If you wish to invest in gold coins in bulk, your coins will be shipped to you in tubes of 20 pieces instead of a protective plastic sleeve.

This American Eagle gold coin is produced by the United States Mint and it is one of the most popular gold coins available to clients wishing to make an investment in precious metals. The 1 Oz Gold Eagle is a quality item which can help protect your wealth for years to come, especially in the longer-term.

The American Eagle gold coin was initially released in 1986 and has been a popular coin for both investors and collectors every year since. It is available in silver and platinum versions and in 1 oz, ½ oz, ¼ oz and 1/10 oz sizes. The United States Mint, which produces these coins, also make the American Buffalo coin in gold. The gold 1 Oz American Eagle coins is available with VAT-exempt Swiss storage.

We recommend the American gold eagle coin for both investors and collectors alike. The American gold eagle is an official gold bullion coin in the USA and was first authorized in 1985. The gold Eagle is minted annually, and has been in continuous production since its release in the 1980s.

This American Eagle coin has a 999 fine investment grade gold bullion composition – this means that it is a 22 karat coin.

The 1 oz gold American Eagle coins were produced for the first time in 1986, but the coins have a much longer history. The U.S Mint originally produced $10 Gold Eagle coins under the 1792 Coinage Act. The $10 gold coin became the face value and a base unit for gold coins leading to the production of other denominations of the coins such as the Half and Double Eagle coins. The last double eagle coin to be produced was the $20 Saint-Gaudens gold coin, which is considered the most beautiful eagle design throughout history. Modern eagle coins borrow in design from the 1907 Saint-Guaden coins that circulated until 1933.

The Features of the 1 Oz Gold American Eagle Coins

Apart from the Gold Eagle coin series, the U.S Mint also produces Eagle coins in silver and platinum in addition to the St. Guaden and the American Buffalo gold coins. The eagle gold coins are popular among investors because they come with a relatively low premium gold price, and are known all over the world.

Swiss Bullion offers all of its products for delivery or for storage in our secure Swiss vault storage, located in Zurich, Switzerland. Storage is free of charge for the first year. When items have been placed into storage, clients may select to sell their precious metals back to Swiss Bullion at favourable rates, or take delivery at any time. The gold American Eagle coin is VAT / MwsT exempt.