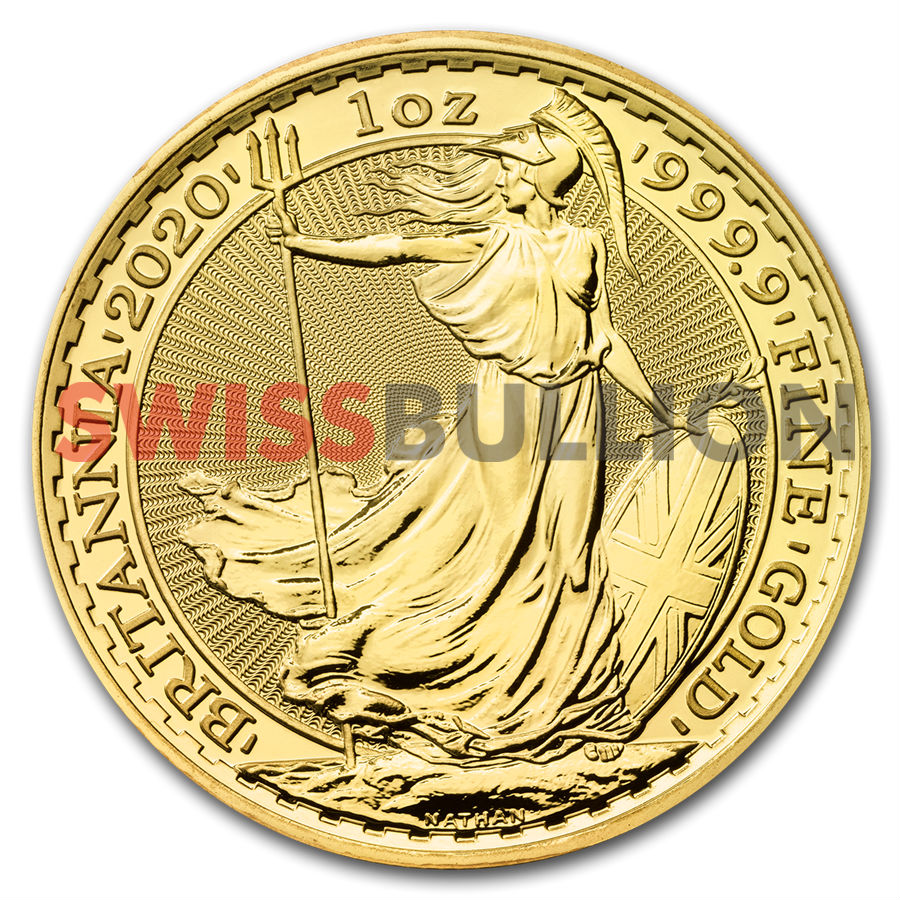 Each coin features Queen Elizabeth II on the front. The coin's face value of £100 is also located on the front.

The reverse of the coin features lady liberty carrying a trident and shield. Circling the coin is written "Britannia, 2020 1 Oz 999.9 Fine Gold".

The Britannia series is available in gold and in silver, and is produced by the Royal Mint.

The gold British Britannia coin is popular among investors worldwide because of the quality of British Minting. The 2020 British Britannia coin features a classic design by Philip Nathan. Lady Britannia is depicted standing against a strong wind, which symbolizes the resilience of the nation. Some collectors consider the Britannia gold coin a modern masterpiece.

The Features of The 2020 Gold Britannia Coin

The design of the 2020 Gold Britannia Coin was chosen after an artistic competition in search of the perfect design was held. The image of Britannia inscribed in the past coin is not as impressive as the one on the 2020 gold coin. The design by Philip Nathan depicts Britannia as the guardian of the nation and the controller of the seas and the British islands.

The pioneering gold coin minted in 1987 contained 22-karat gold content, which translates to 91.67% pure gold. The rest of the coin content was copper until 1989. Gold coins minted from 2013 onwards contained .9999 pure gold.

The image of her majesty Queen Elizabeth II inscribed on the coin is an effigy designed in 2015 by Jody Clark. The image depicts her majesty wearing the Royal Diadem crown at 89 years. The front of the coin bears the inscription of the guilloche security feature alongside the face value and the queen’s name.

The Britannia design by Nathan shows the lady holding a trident in her hand with her left hand placed on the shield that bears the Union Jack. The weight, metal content, purity, and the date mark of the coin are all inscribed on the back.

The 2020 British Gold coins available are in Brilliant Uncirculated condition. The image of Britannia was used for the first time on coins in the Roman empire. This was in the 2nd century AD when Emperor Hadrian introduced a few coins that showed a female figure that symbolized what Britain was.

However, when the occupation of the Roman empire came to end in early 400s, Britannia stopped appearing on coins for hundreds of years. King Charles put back lady Britannia on coins in 1672 in order to inspire Britain against maritime threats.