Will Inflation Reemerge in 2020?

If there is one economic term that could describe the 20th century, perhaps the most apt term would be “The Inflation Century”.  For most of human history, inflation was generally an afterthought.  Little is mentioned in old English text of price inflation.  Similar conclusions are reached across most, if not all, the globe.  It seems, as Milton Friedman once noted, inflation is always a monetary phenomenon.  That may not be true always, but it is a good point to live and govern by.

In this “thought vein”, a most intriguing story of the 21st century to date has been the missing inflation spikes that one would expect with such massive money printing operations.  Everywhere across the world, prices are growing, but generally slowly.  The constrained price picture is happening even with astounding growth in government spending and central banks printing money out of thin air.

This leads to the question here - Will the power of inflation reemerge in 2020?  Will the missing inflation trug materialize?

Many observers would, no doubt, dismiss the question as something concerning radical economists.  To some professionals, the view is that economists have figured out how to manipulate the economy to such a degree that the advent of high inflation is not a useful discussion point.  People of this view have been right so far, and perhaps they will continue to be right in 2020, but then again, perhaps not.

Could 2020 be the year that inflation regains power?  A look at how inflation looks at the end of 2019 follows.

The inflation picture ending 2019 follows.  Across the globe, prices generally rose from 2016 through the middle half of 2018.  After that, inflation began to retreat. 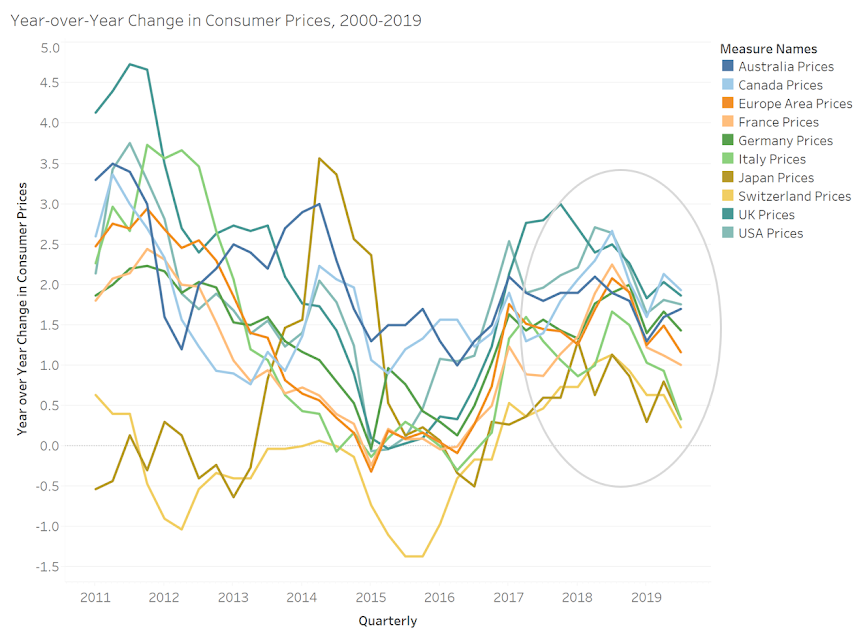 Potential Triggers for Higher Inflation in 2020

With the year ending soon, the 2020 horizon poses the question - What is on the price horizon?  Among the many possibilities, three seem easily identifiable.  The first is that the money printing presses will come back in style in 2020.  The second is that already low interest rates look to be heading lower still (short term rates).  The third is that governments are being encouraged to start spending money again.  For instance, new ECB President Christine Lagarde has been telling leaders of European countries to start spending more money in 2020 to avoid a potential recession.  These three forces will no doubt push prices higher in 2020 - that is, unless a recession materializes.

The global inflation picture at the end of 2019 is one of little concerns.  Prices were actually growing faster at the beginning of the year and have subsequently cooled to end the year.  This has led some observers to argue that inflation will not be a problem in 2020.  Perhaps, but then again, it is quite possible that the additional $1 trillion central bankers will print in 2020 will start to eat away at the value of currencies in more earnest in 2020.  We may very well be on the edge of inflation jumps in the coming year.  Hang on to your seats and enjoy the ride.