Why Have the Russians Accumulated So Much Gold

Countries accumulate gold for reasons unbeknownst to many.  Some countries’ leaders and central banks think fiat currency is due to a reset, and they want financial resources to keep them afloat when that happens.  Others need gold as a means of supporting their currency.  Still others use gold as a part of an investment strategy.  The many possible reasons for why a country may accumulate gold leads to the question here – Why is the Russian central bank accumulating so much gold?

The Data
Before speculating on the reasons, a visual of the data produced by the World Gold Council follows.  The figure shows the gold holdings of the top 20 entities.  Three years are shown, with the lighter the blue dot representing an earlier year (2016).

Unsurprisingly, the United States is by far the largest holder of gold.  As of March 31, 2019, the Americans held a massive $339 billion worth of gold.  The next closest country was Germany at $140 billion.

If one looks closely, there is one country that has been accumulating large amounts of gold over the past few years.  That country – Russia.  As of the end of the first quarter of 2019, the Russians held $90 billion in gold reserves.  That is almost double what Russia had in its gold reserves just five years ago.  The question, of course, is why. 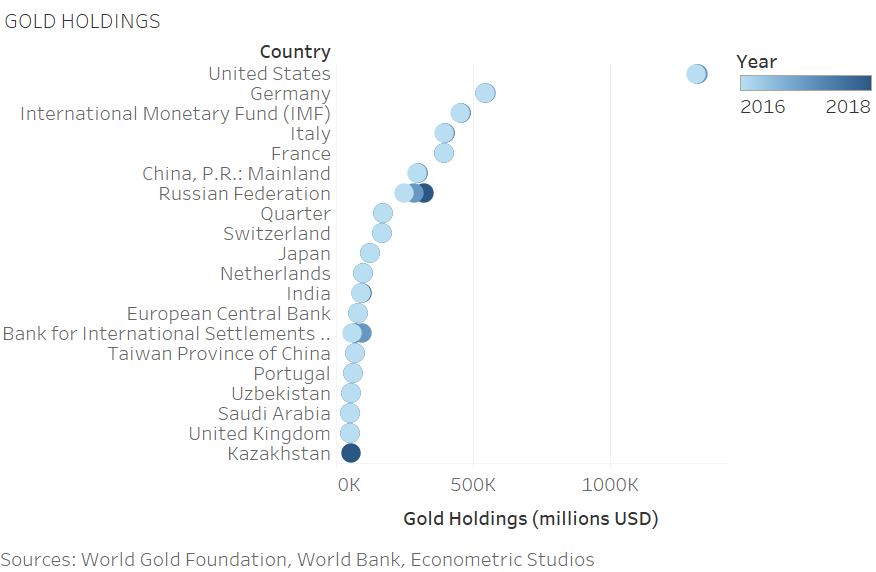 Why have the Russians Accumulated So Much Gold?
Why are the Russians accumulating so much gold?  One of the more plausible reasons is that the Russians want to set up a cryptocurrency to replace the US dollar as the world’s reserve currency.  Think about it.  Russian leadership hates American hegemony, and in particular the hegemony created by the US dollar.  They seem to despise it so much that they may do everything in their power to weaken it.

In the world of finance, there’s no hotter topic than cryptocurrency.  Whether Bitcoin – the world’s leading cryptocurrency is here forever or not – cryptocurrencies appear to be firmly footed with a bright future.  The one problem with cryptocurrencies is that most have nothing backing them up besides the faith of both sides of a transaction that it will be worth sometimes to others.

Fortunately for many users of cryptocurrencies, that faith is there.  The broader universe of money users, though, are more skeptical.  They want something to back up the cryptocurrency should something happen.  This is where gold comes into play.

Should the Russians amass enough gold to back up a globally competitive cryptocurrency, the cryptocurrency could legitimately compete with the US dollar as the backing for a large portion of the world’s transactions.

The Russians are, of course, a long way from having this pipe dream come to fruition.  Russia would likely need at least a few trillion to get such an idea off the ground.  At only $90 billion, they are many years away.  This, of course, will likely not be a deterrent in working towards a goal that’s rooted deep within the Russian leadership psyche.