What Happens When Bankers Introduce Zero or Negative Rates

Suppose, for the moment, that you are a peasant in Medieval Britain.  To keep your family from starving, you take up farming.  Next, suppose you have no money.  None, and you are unable to work out a deal with fellow peasants to acquire the means needed to perform farming on your land.  Although in reality peasants almost never received loans, suppose that you get a loan for the most important farm animal of the time – an ox.  Do you think you would pay interest on that loan?  The answer is probably no.  In many Christian societies of the time, usury – the charging of interest on borrowed funds – was unethical, forbidden by the Church.  Is the world heading that direction now?  If so, what does that mean for inflation and by extension, gold and other precious metals?

Global Interest Rates
The backdrop here is global interest rates and if there will be anything left of them in the coming years.  Consider the following graphic, which shows short-term central bank interest rates for many of the most influential central banks in the world.  Do you notice any trend? 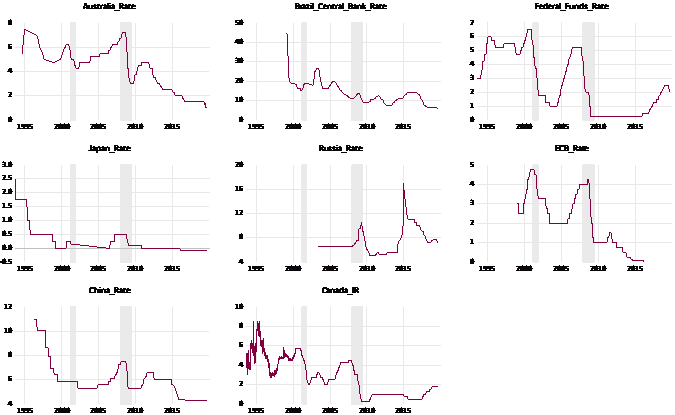 The Situation
The unprecedented situation begs the question – Will negative or interest rates approaching 0 lead to a massive inflation problem, boosting precious metals prices along the way?

The answer is, of course, probably.  Inflation is by and large a monetary phenomenon.  Some detractors might say – Why has the massive money printing up to this point led to massive inflation?  The answer to this question is that the money printing presses have not filtered through to main street spending, instead showing up in stock price inflation and enlarged bank balance sheets.  At some point, inflation should follow.

Conclusion
Central banks continue to lower rates.  If the current trend continues, in the not too distant future, many of the most important central banks will have negative or 0 interest rates.  How this will affect inflation, and by extension precious metals, remains to be seen, but a safe bet would be to at least allocate some investment to precious metals to take advantage of the potential price gains.