The World is Ready for the Next Major Gold Event

When people think of hardcore money, what do most people think of?  Some, no doubt, think of the obvious – the euro, the dollar, the pound, and the other paper currencies.  Others might think of yachts, penthouses, and other relatively expensive items.  Perhaps the most thoughtful of the options is gold.  Yes, the world’s most well-known precious metal.  The yellow precious metal has held the title of store of value for at least the past 2,500 years.

Some background
A brief perusal of the history of gold seems appropriate at this point.  The first known use of gold as currency was in 643 BC in Lydia (now known as Turkey).  By 560 BC, the Lydians mastered separating silver from gold, and thereby creating the world’s first truly gold coin.  The first king to employ the gold coin was Croesus, leading to the phrase “rich as Croesus”.
About 500 years after the Lydians, the ancient Romans first issued their gold coin, known as the aureus.

Fast forward another century to 1,066, when the British currency system was established, creating the silver pound.

Another 200 years later brought about the gold ducat out of Venice.

Shifting to the 18th century, in 1792, the U.S. officially began a silver-gold monetary system.

In 1900, the U.S. officially put itself on the gold standard.

In 1913, at the onset of World War I, European countries officially suspending the gold standard for their currencies.

Fast forward just 25 years and, with the end of the global Depression, countries began returning to the gold standard.

The gold standard period was solidified with the Bretton Woods agreement, which established gold as the measure of value for all currencies. 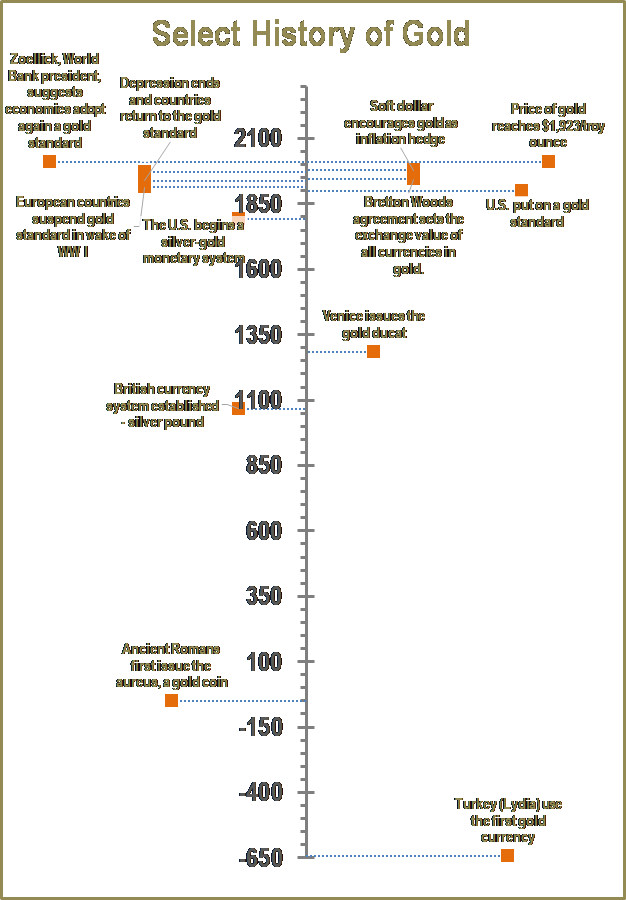 When is the next gold event?
Does this background make one wonder when and what the next “big gold event” will be?  No one knows for sure, but recent policies out of central banks could be the trigger.  Central banks have recently shifted to even more quantitative easing (i.e. printing money) and even looser interest rates.  Reserve requirements have been loosened.  Perhaps people will soon lose faith in the entities responsible for manipulating money.  No doubt gold will be a big winner.
Conclusion
Gold is perhaps the finest representation of hardcore money.  It has held this title for at least the past 2,500 years.  In looking at select historical events in the history of gold, one has to wonder when the next big “gold event” will be.  With the incredible amount of money that has been printed in recent years, the next big event may be closer than anyone thinks.