The Effects of Currency Wars

If you are a student of economics, or of the global markets in general, you know that there is not much more intriguing than a currency war (outside of an actual war).  Currency wars are basically wars without guns, and sometimes they can do much more damage than the barrel of a machine gun.

The topic is prescient because of recent comments out of Europe, the United States, China, Russia, and other global powers.  When measured by searches, Google Trends reports that searches for “currency war” for the month of August are already at an index value of 52, and the month is only half over.

Since 2010, according to Google Trends, there have only been two other months with more searches for “currency war”.  Those two months are October 2010 and February 2013.  What was happening back then?

In October 2010, the discussion mainly focused on the relationship between the U.S. and China.  Brazilian Finance Minister Guido Mantega made headlines when he mentioned a possible currency war in September 2010.  Perhaps unsurprisingly, concerns about a full-fledged near-term currency war fizzled out by mid-2011.

In 2013, the main players in the currency war discussion moved away from the U.S. and China to the European Union and Japan.  The trigger for the currency war discussion stemmed from measures announced by Japan that could devalue their currency.  The concern was alleviated by late February when the G7 and G20 issued independent statements committing to avoid competitive devaluation. 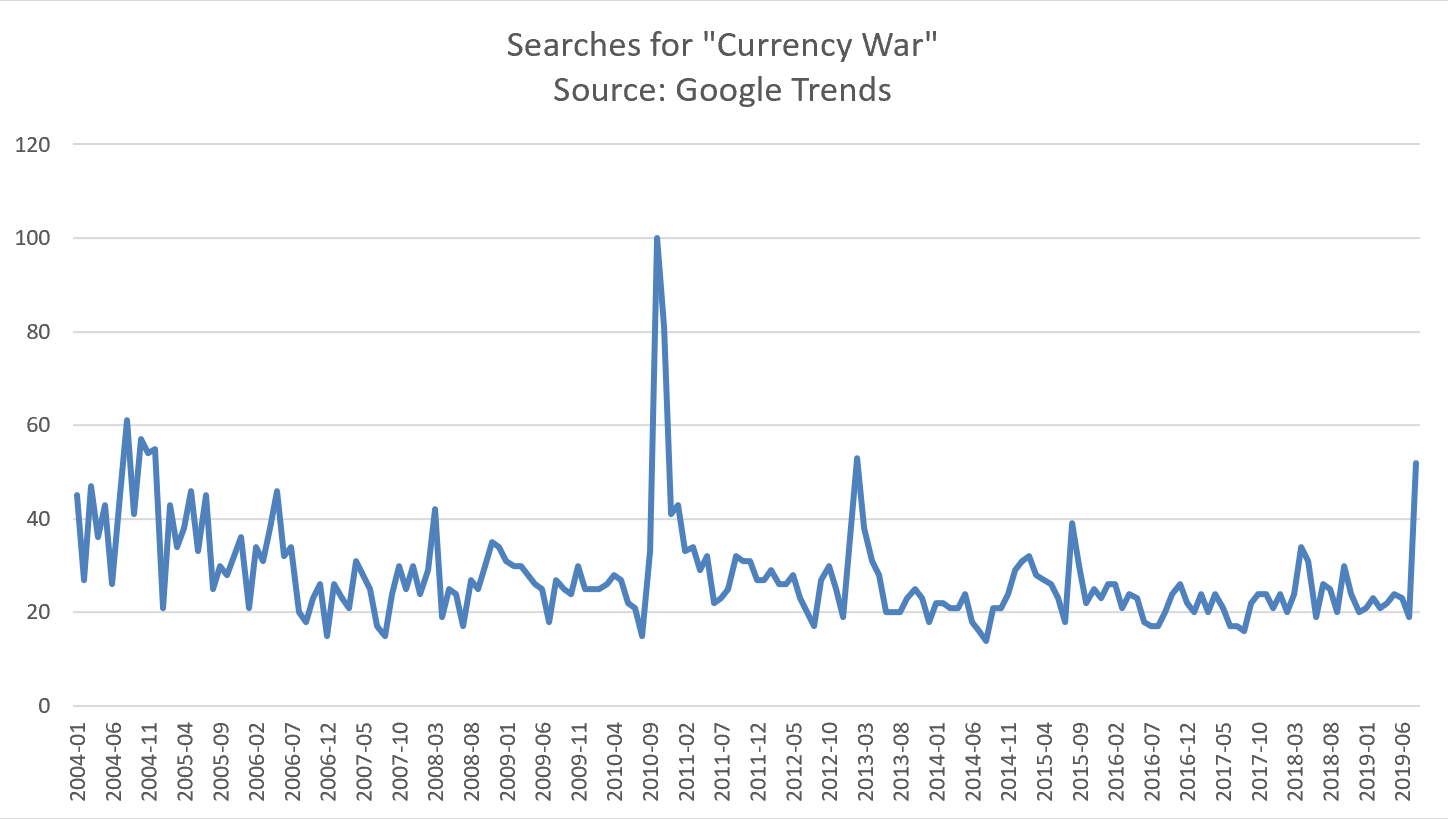 The Effects of Currency Wars
Fast forward to August 2019 and discussion of potential currency wars is back on the discussion block.  The real issue is what kind of an effect a real currency war between say the European Union, China, Japan, and the United States could have on the global economy.  The answer, of course, is quite a lot if every country participated in a full-fledged competitive currency devaluation.

There are two main effects from currency wars.  The first is that countries’ citizens may feel as though their standard of living has been reduced because of reduced purchasing power.  According to Richard Cooper, “a substantial devaluation is one of the most traumatic policies a government can adopt – it almost always resulted in cries of outrage and calls for the government to be replaced.”

Conclusion
A new age of currency wars seems to be upon us.  It is impossible to predict how the currency wars will turn out, but one thing is certain – if the world enters into full-fledged currency wars, there will be winners and losers, and the effects from being a winner or a loser could last for generations.  May the best currency win.