If one has not been paying attention to cryptocurrencies, now may be a good time to take a look.  So far, it has been a massive year for the world’s most well-known cryptocurrency – Bitcoin.

After starting the year at $3,833, Bitcoin has been on a tear.  Bitcoin ended June 22nd at $9,791, meaning the cryptocurrency is up 155 percent since the start of the year.  The first part of the year has been great for many asset classes, including stocks, but almost all of these come nowhere near to as good of a return as what Bitcoin has returned through the first six months of 2019.  Healthy, very healthy.

The Bitcoin Re-Boom
The rise of Bitcoin’s price this year begs the question whether Bitcoin is rising back to a fair value relative to other currencies, or whether the recent rise is simple another euphoric phase that will end up in a popped bubble.  A few theories on why Bitcoin is rising follow.

Central Banks
The first reason Bitcoin’s price surged this past week was that central banks around the world – in particular the Federal Reserve, the European Central Bank, and the Bank of China – sent a much more dovish message.  The Federal Reserve indicated that it might actually cut rates in the coming months if conditions warrant lower rates.  The European Central Bank indicated an end to quantitative tightening.  The People’s Bank of China’s message has been one of doing whatever it takes to keep the economy in China moving towards 6.5 percent annual growth (they likely will not succeed on that front).

With central banks sending a signal that further monetary easing, the Bitcoin market took this as a sign of potentially more money printing on the horizon.  More money printing makes Bitcoin scarcer in the eyes of investor, and thereby puts upward pressure on its price.

FUD Is At Play
What is FUD?  FUD means fear, uncertainty, and doubt.  The world is at an extraordinarily uncertain time right now.  Tensions between the U.S. and China and Iran could meet boiling points in the coming months.  Some European economies may be on the verge of a recession.  In fact, fear of a recession is perhaps the top reason for Bitcoin’s price rise.
Most interesting in all this is that FUD is pushing investors to Bitcoin.  In times of uncertainty, one would think that investors would shift attention away from what some would consider a risky asset class.  That has not happened.  Instead, investors apparently view Bitcoin as a safe store of value.  That is an incredible, almost unbelievable achievement for a currency with no formal government backing.  Amazing, Bitcoin.

Technical Analysis
A third reason for Bitcoin’s strength might be technical analysis.  Interestingly, the recent rise in the price of Bitcoin started around the same price point as in 2017 – the year when Bitcoin surged to almost $20,000.  Whether Bitcoin actually reaches $20,000 is anyone’s guess, but it appears the cryptocurrency has a key support level at around $3,000.

Conclusion
Bitcoin’s price continues to rise.  Reasons for the rise include a slowing global economy, poor monetary policies, fear, uncertainty, and technical analysis.  Overall, 2019 has been very kind to holders of the original cryptocurrency.  The re-boom of Bitcoin is here. 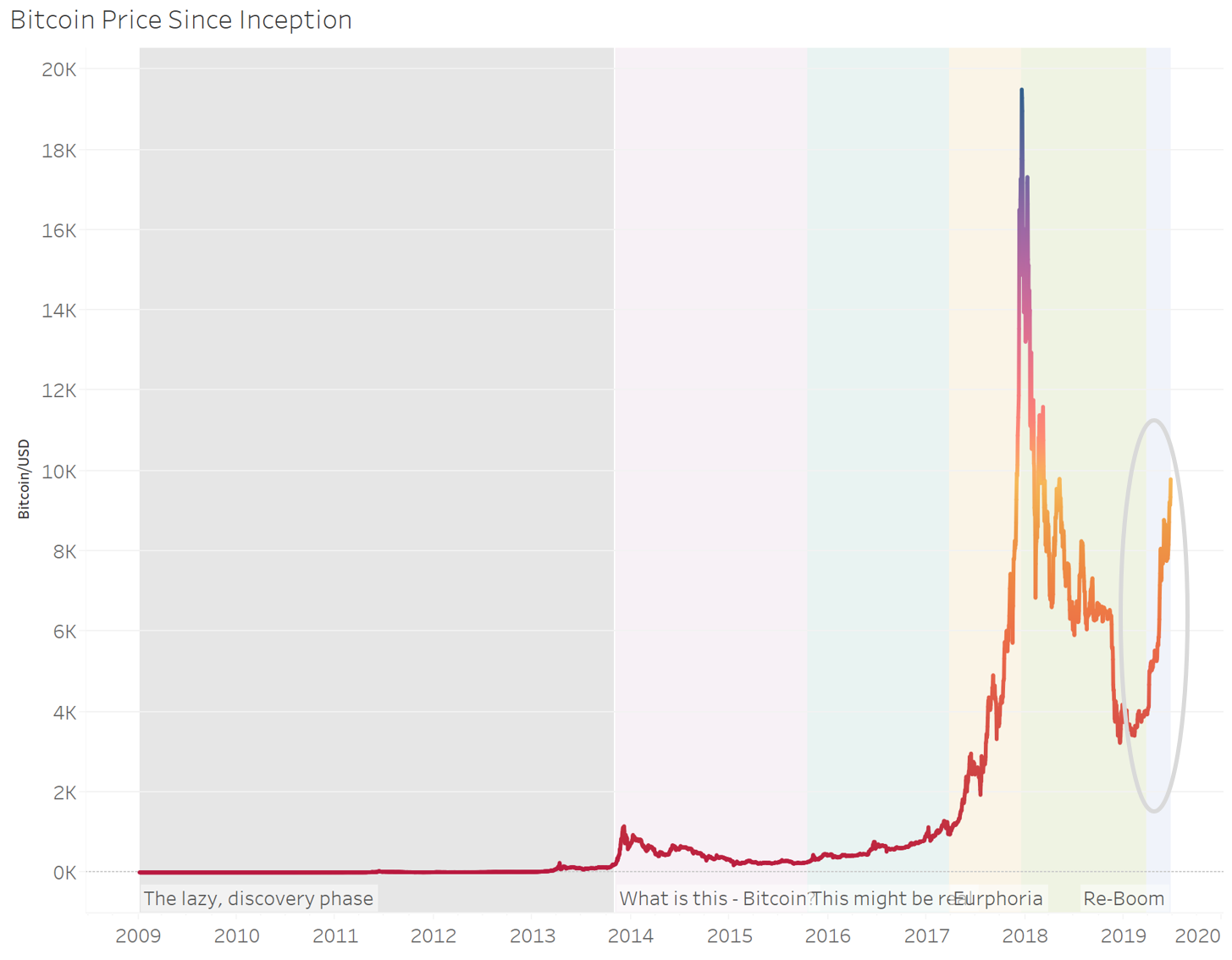