The 2019 year has been a year for the ages for owner of gold.  The world’s most important precious metal began the year at a price of €1,117.  As of the middle of September, that price has increased to €1,358.  Put together, the price of gold (London PM, 3 PM) is up a whopping 22 percent for the year.  Most any investor would take that type of return in a heartbeat.

With the last quarter shortly approaching, now is a good time to think about where the price of gold could go for the remainder of the year.  Will the price of gold increase further?  Could gold have a cooldown period?  What things are one the horizon that could push the price of the precious metal into even further positive territory?  One possible answer to this question is the European Central Bank (ECB) and their decision to start printing money again. 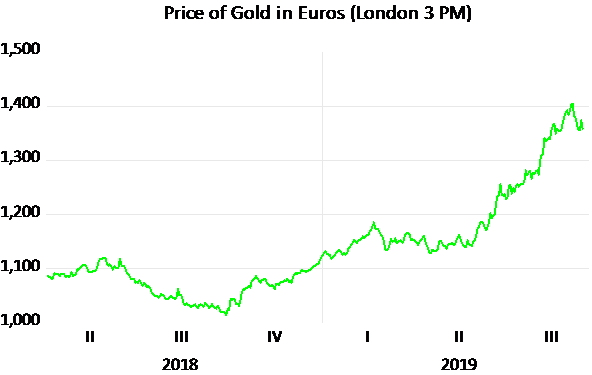 Mr. Draghi’s European Central Bank
Mr. Draghi, or if we use his nickname, “Dovish” Draghi (Mario Draghi, head of the ECB) announced this past week that ECB would begin printing money again.  The renewed money printing operations were announced to address a theoretically weakening European economy.  Among the new announcements were two that relate to the topic here.  The first is almost hard to believe.  The ECB is lowering the deposit rate further, from an already astonishing -0.4 percent to an even more negative -0.5 percent.  The second action is the money printing operations.  Commonly known as quantitative easing, the ECB will begin purchasing another €20 billion euros of bonds every month in perpetuity.

How does the ECB get the money to buy €20 billion in bonds every month?  The simple answer is out of nowhere.  The ECB can just make up money if it wants to.  Dovish Draghi and his ECB colleagues apparently think that more money printing operations are needed to boost the European economy.  More than likely, he is wrong, but that discussion is for another day.

With the ECB printing more money, does that have anything to do with the price of gold?  The answer is yes.

ECB Money Printing and the Price of Gold
The following graphic has the price of gold (blue, right axis) and the ECB’s assets (green, left axis).  Do you see a relationship?  Yes. 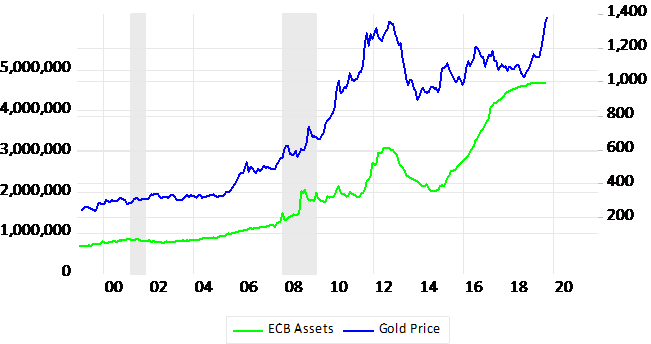 Conclusion
In summary, the European Central Bank is again back to printing more money.  Among the likely winners from this move are owners of gold.  By printing another €20 billion every month out of thin air, Mr. Draghi is giving owners of gold a very nice present, something gold owners can thank him for.