How Much Money Will Be Printed in the Next Year?

Perhaps when monetary historians look back on this age, they may call the age of “money superabundance.”  What does this mean?  In essence, in the past decade or so central banks have figured out that they can print money with little to no consequences.

In theory, when central banks print money with such massive quantities as they have been, inflation should follow.  To many monetary theorists, it is a surprise that inflation has been so weak in the face of such money games.

With the third of 2019 coming to an end, and 2020 shortly approaching, now seems to be a good time to make some guesses on how much money will be printed in 2020.

Before looking at the recent money printing operations in the following charts, take a guess at how much money central banks may print in 2020.  Could the amount that central banks print out of thin air reach €1 trillion?  Could it reach €10 trillion?  Guess!

Central Bank Balance Sheets Across Nine of the World’s Largest Central Banks
The topic is introduced, and hopefully a guess has been made on how much money central banks may print in 2020.  Here is a look at what central banks have been up to recently.

Notice anything?
The one most glaring observation is that all the central banks are increasing their balance sheets, except for one, the U.S. Federal Reserve.  Interestingly, the Federal Reserve has reversed course, and is now back in the money printing business to expand its balance sheet.  More interesting is which countries are expanding their balance sheets the fastest.  Which ones are they?  The European Central Bank (ECB), the Bank of Japan (BOJ), and the Bank of England (BOE). 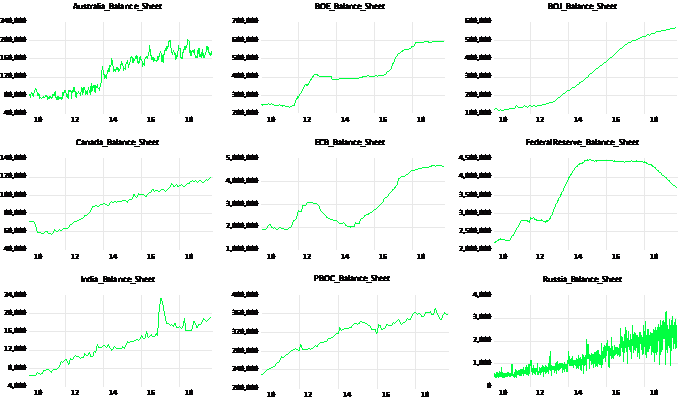 The 2020 Picture
Given that 2019 was not really a big money printing year for most central banks, what does 2020 have on tap?  With the European Central Bank, the Bank of Japan, and the Federal Reserve, among others, having announced renewed plans to expand their balance sheets through money printing, 2020 will likely tell a different story.

Conclusion
With central banks set to print at least another €800 billion in 2020, one might wonder when inflation will respond to the massive money printing operations around the world.  It has yet to show up, but that does not mean the risk is not there.  It simply means that a potential inflation spike, when it does happen, will occur very quickly.