Gold Rising is an Unintended Consequence of Middle East Turmoil

Suppose the year is 1974. The global economy is dealing with a terrible oil crisis that threatens to engulf economies everywhere. Western countries, particularly European nations and the U.S. - are putting their heads together in an honest attempt to solve the oil crisis.

Across the pond, American President Richard Nixon concocts a plan to limit some of the risk to America’s oil future by offering Saudi Arabia’s ruling family a political deal that they would have to consider. The deal was this. The American federal government would offer the Saudis with military equipment and supplies in exchange for the Saudis ensuring that the Americans would have a consistent and reliable source of oil for the foreseeable future. The plan was risky, and required one last step to make it mutually beneficial for both sides of the agreement. The Saudi government would purchase U.S. Treasuries with their oil earnings. Such a move would turn out to be a fairly important source of financing of American deficits for years to come.

Incredibly, the Saudis took the bait and the modern day petrodollar was born. In the ensuing years, the petrodollar has come to dominate oil markets. The vast majority of oil is now priced in dollars, and all indications are that the American government is willing to defend the pricing oil in dollars at the barrel of the gun, if necessary.

The following figure takes a look at the price of oil and the price of gold, both in euros. As one might expect, the two are connected to an incredible degree. Does anything stand out? Well, the two curves are closely connected. The simple correlation is 11.7 over the period shown. 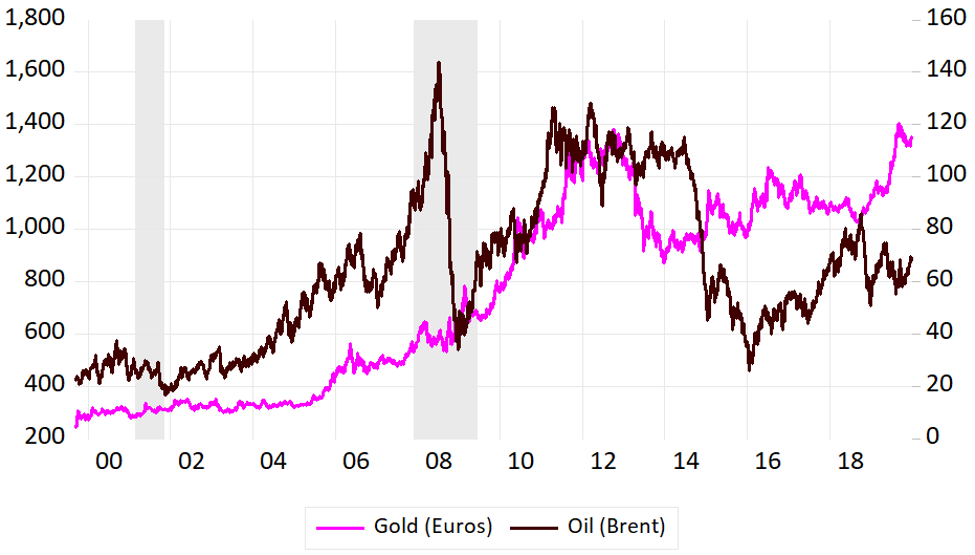 The Price of Oil Then Responds to Potential Problems in the Middle East?

Overall, the price of gold runs with the price of oil, usually. With global tensions seemingly heighted going into the last half of the first quarter of 2020, one might want to expect the risk-hedging aspect of gold to dominate the real physical demand aspect of gold throughout 2020 - which suggests another good year for owners of the world’s most well-known precious metal.