The gold Krugerrand coin is produced by the Rand Refinery in South Africa, and was initially released in 1967. It is known for its slightly copperish colouring. The gold Krugerrand was one of the only gold coins available to precious metals investors in the late 1960s and 1970s, other than the British gold Sovereign Coin. However, access to these coins was somewhat restricted regardless of the huge demand. From the 1980's onward, production of these coins decreased slighly, in part due to the release of gold coins by other governments, such as the Royal Canadian Mint's gold Maple Leaf coin. However, for individuals looking to buy gold coins, the South African gold Krugerrand has always remained one of the most popular options. This is due to its low premium and its availability worldwide.

About the South African Krugerrand

The South African Krugerrand was one of the first investment grade gold bullion coins to be released into the retail precious metals market. In the late 1970s and early 1980s, 90% of all gold coins sold into the gold coin market for retail investors were gold Krugerrand coins. This is a very high figure, especially considering that there were restrictions on purchasing gold Krugerrands due to Apartheid.

The Krugerrand coin features an image of Paul Kruger on the front, with the words 'South Africa' inscribed around his portrait. The reverse side of the coin features an image of a Springbok Antelope, with the word 'Krugerrand' written above, the date that the coin was minted on the side, and the weight of the coin below. The design of the Krugerrand gold coin has remained the same since its release. 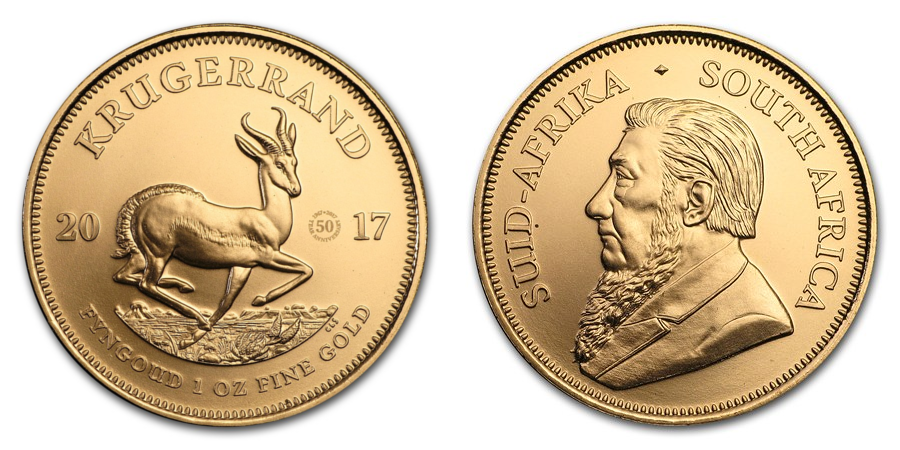 The Krugerrand gold coin is available in both one ounce and fractional ounce sizes, including 1/2 ounce, 1/4 ounce and 1/10 ounce sizes. Krugerrands are very popular amongs gold investors due to their low premium, and availability on the market.

Due to their low premium and availability in the market, many investors will purchase larger amounts of gold Krugerrand coins. Coins are supplied in tubes of 20 pieces. The coin's slightly copperish colouring is due to the fact that the gold Krugerrand is 999 fine. The remaining metal content is primarily copper. This changes the tone of the coin slightly, however it also makes the coin harder and more durable. Gold is a very soft metal, and a purer gold coin can easily be damaged.

In 2016 the Rand Refinery launched the Silver Krugerrand coin, and in 2018, the Platinum Krugerrand was released. The Rand Refinery has also launched a line of gold bars, named the Loxodonta Africana gold bar. These bars feature an image of an Elephant on the front.