Have you ever heard of a professional swimmer needing a life jacket? The answer would probably be no. They show so much confidence and strength in their skill that they don’t see any danger, even in strong currents. They don’t realize they need a lifejacket until they're already in danger. The same is the case with central banks worldwide and Gold, which is their financial life jacket. For years western central banks don’t give due consideration to the importance to gold. But times soon change. Today, western central banks need gold as a backup plan for the financial system. Concerns are ever increasing that the financial industry is on the verge of collapse. Both financial experts and institutions across the globe are acknowledging the ultimate value of gold as a global transaction asset.

Germany has noted the importance of gold in the book named Germany’s Gold published by the country’s central bank, which refers to gold as being synonymous with economic prosperity. Despite the decades-old debate over the importance of gold, the metal does continue to hold its value as a stabilizer for the international monetary system. Without it, authorities worldwide would struggle to trust the value of international currencies against their own, which would impact trade relations.

A true depiction of the importance of gold was graphically represented in 1960 by John Exter, an American economist. In his Inverse Pyramid, Exter conceived financial assets in an appended form, with gold as the base asset on the pyramid. It is shown clearly in the pyramid that paper money is least volatile as its value is almost always directly correlated to the gold reserves. The more and more you look up in the pyramid the more and more risk is involved with the assets. Exter deliberately kept the gold out of his pyramid as he considered it as the only asset without any liability attached to it, calling gold the “hard core” of the monetary system we have. The IMF also cited gold as an asset without bearing any liability to it, which is a status that no other financial instrument holds. In its publication “Balance of Payments and International Investment Position Manual (BPM6)”, the IMF lists the international reserves with relative liabilities, in the almost same order as the Exter pyramid. 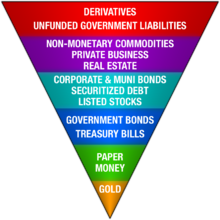 Another European bank, the De Nederlandsche Bank (DNB) has a similar stance regarding gold saying, that gold ‘always’ retains its value.

The Bank of Finland (BOF) referred to gold as a “basis of the monetary system” and as a “genuinely global medium of exchange”.

According to the French central bank ‘Banque de France (BDF)’, “[…] gold is considered to be the ultimate store of value.”

Gold as an Instrument of Insurance:

In the aftermath of the global financial crisis of 2007-08, central banks of many major European countries became the main buyers of bullion. Many nations like the Netherlands, Poland, Turkey and Austria along with Germany started working on plans to repatriate their gold reserves held internationaly, mainly in London and New York. Germany’s plan to repatriate its gold is mainly related to financial security. Global financial instability and geopolitical instability of the Eurozone have created doubts about the debt-laden financial system in the minds of monetary planners. Another important factor for bringing the gold back in the vaults of the central bank is for liquidity, which means having the bars accessible in the event they need to be sold.

When the global financial crisis hit the world and Lehmann Brothers collapsed, the world knew that the ever-growing bubble of global debt was about to burst. Unfortunately, instead of remedying the flawed system, more and more debt was injected into the system, mostly by China. Today, global debt is three times greater than global GDP. Global political uncertainty amid the Eurozone crisis, trade wars and surge in debt to GDP ratio have all made the world aware of the fact there another global financial meltdown is looming. All the world can do now is to prepare for it, and European central banks are doing just that by using gold as their backup plan.