The American Gold Eagle coin, or Gold Eagle, was first produced by United States Mint in 1986. The design of the coin was created by Augustus St. Gauden by the patronage of President Theodore Roosevelt. The coin features the full-length figure of Lady Liberty with a signature torch in one hand and an olive branch in another and American bald eagle on the reverse side. Each 1-ounce coin consists of 31.1 gram of pure gold, with a purity of 999 (22 Karat). The coin also contains a small amount of silver and copper. Each 1 Ounce coin weighs approximately 33.9 grams. The American Eagle gold coin is an official coin of the U.S.A .

A History of the Gold Eagles Gold Coin

Although the coin was first available in 1986, Augustus St. Gauden created the design in 1905. St. Gauden was selected by the president in office, Theodore Roosevelt to created more attractive American coinage. The image of St. Gauden’s Lady liberty is considered his most prominent achievement. This image and was first used in 1907 for Gold Double Eagle ‘St. Gauden’ coin. Miley Busiek  designed the Bald Eagle featured on the reverse side of the coin. 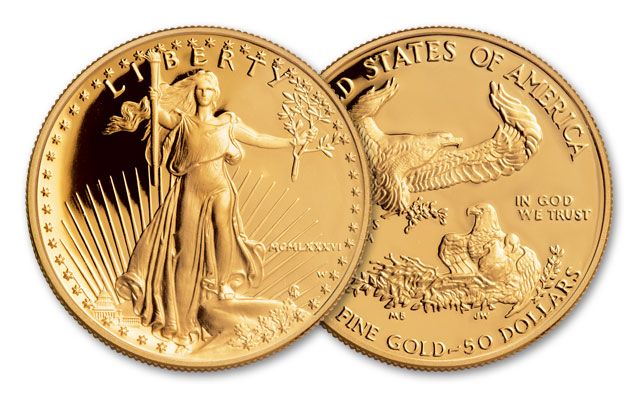 The 1 Ounce gold Eagle was first released in 1986 and features America’s national bird, the Bald Eagle, holding some branches in his talons while returning to his nest. A female Eagle and newborn are sitting in the nest, waiting for the return of male Eagle.

Gold Eagles comes in four different weights: 1oz, ½ oz, ¼ oz, ¼ oz. It is one of the most well-known coins and is well sought after by investors and collectors alike. As the United States mint produces these coins, their quality and composition are guaranteed. Each gold Eagle has a face value in US Dollars, with the 1 Ounce gold Eagle having a face value of $50 USD. 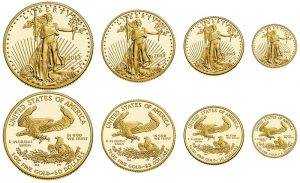 About the Gold Eagles Gold Coin

On the front of the coin which features Lady Liberty, the word “Liberty” is written at the top center, and the year of minting is located at the right side of Lady Liberty, just below the center.

Golden eagles coins are minted annually in four weights. The American Eagle coin series is the most popular series manufactured by the United States Mint, and is available in gold, silver and platinum. The image of the gold and silver Eagles has remained the same since their initial introduction into the market. The platinum American Eagle image is updated annually.

The United States Mint also produce the American Buffalo gold coin, and the double Eagle St. Gauden, both of which are only available in gold. SwissBullion.ch sell the gold Eagle coin in wholesale quantities, and for secure Swiss storage, located in Zurich.