Could Bitcoin Win the Nobel Prize?

In looking at the shape of the global economy, it is hard to decipher where things are heading.  On the one hand, many countries’ economies have been slowing down.  In response to this, central banks have begun lowering interest rates again.  The historically low interest rates central banks have given the world over the past decade are not coming to an end anytime soon.  In addition to lower interest rates, leaders of the most influential central banks have indicated that they plan on printing more money in 2020.  As with low interest rates, there is no sign yet that the massive amounts of money printing by the world’s central banks is coming to an end anytime soon.  By latest estimates, the European Central Bank and the Federal Reserve may print another €1 trillion in new money in 2020.  This concern on behalf of policymakers comes, interestingly, at a time when global consumers are in good shape.  Global stock markets are in healthy shape.  It is a very fascinating time to be an observer of the global economy.

The situation in which the global economy finds itself sets the backdrop for the discussion point here – government debt.  Government debt is still growing quickly around the world.  Surprisingly, even though most countries are on an unsustainable path with their debt, some economists, including new European Central Bank President Christine Lagarde, continues to call for more government spending.  She and her friends apparently think (do they ever change their mind?) that more spending will lower the risk of another global recession.  What does this mean for debt?  This means more debt.  More, ever more, debt.  There does not appear to be very many willing to suggest new taxes.

This push for more government spending leads to the question – How will the world’s governments address the pending debt implosion?  Will more money be printed, regardless of the consequences?  Will spending be curtailed?  Perhaps some creative ideas, such as printing €1 trillion coins, will take hold?  Will taxes go up?

The answers to each of these questions are, unsurprisingly, unknown.  The massive uncertainty on the debt horizon is an opportunity for people willing to present plausible solutions to the problem.  One potential solution – Bitcoin.  By shifting to a currency that cannot be controlled by governments, Bitcoin offers the people a real option to prudent government management.  Could Bitcoin be the surprise Nobel Prize winner of the 21st century?

A Visual Inspection of Debt

Since the topic here is debt, it seems prudent to include the actual debt figures for countries around the world.  The following figures show government debt to gross domestic product (GDP).  Anything surprising?  Perhaps the most obvious conclusion is – we have a problem. 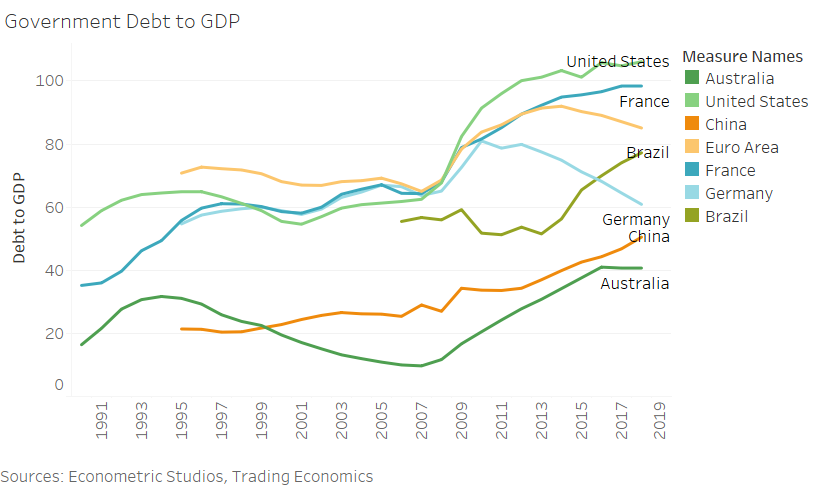 One of the most important issues of the 21st century, perhaps the most important, is the massive amount of debt piled up across the globe.  The Nobel Prize may go to individuals that can solve the issue.  One of those solutions could be Bitcoin.  Most will probably laugh, but Bitcoin offers a realistic alternative to government-controlled currency.