The Perth Mint is located in Perth, Australia, and is run as the Australian Government's official bullion mint. The Perth Mint has been operational since 1899. Initially the Mint was founded as a branch of the United Kingdom's Royal Mint, when Australia was still a British colony. Australia is a country rich in gold bullion, and the Perth Mint initially used the gold that it purchased to manufacture British Sovereigns. During the turn of the centry, the British Sovereign was a worldwide recognised coin that was regularly used for international trade due to its gold content. The British Sovereign was produced at Royal Mint branches, including the Royal Canadian Mint.

The Perth Mint produces and sells a range of gold bars, from 1 gram to 1 kilogram sized bars. The most popular sized gold bars are the 1 Oz Perth Gold Bar, the 100 Gram Perth Gold Bar and the 10 Ounce Perth Gold Bar.

Each Perth Mint gold bar features the Perth Mint logo at the top, with a Swan in the center, and the words "The Perth Mint Australia" circling the image of the Swan. Beneath the logo is the bar's weight, fineness and metal type. The reverse side of the bar features a repeating image of a Kangaroo hopping. 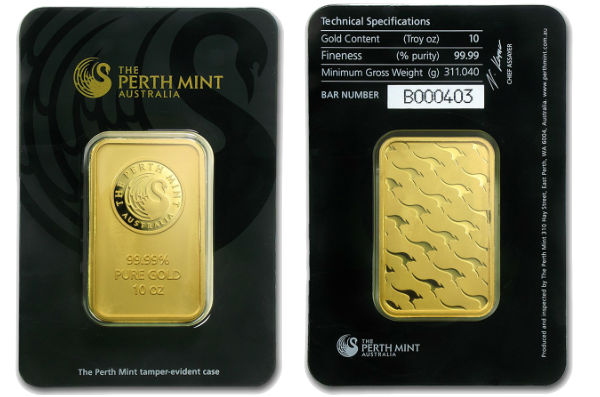 Perth Mint gold bars are popular with precious metals investors as the brand is well known world wide. Many gold investors like to collect Perth Mint products, in particular the Kangaroo gold coin, which features a new image of a Kangaroo each year, and the Lunar series of gold coins, which feature the Chinese lunar calendar.

Perth Mint gold bars do sell at a low margin over the spot price, and are therefore a good option for gold investors. Perth Mint also sell a series of silver bars.