Credit Suisse is one of Switzerland's largest investment banks. It is headquartered in Zurich, Switzerland, with offices worldwide. The bank was originally founded in 1856, as part of a program to fund the construction of Switzerland's railway network. The bank started focusing on its retail banking business around 1900. This was in part due to growing competition from other Swiss banks, including UBS and Julius Bar. However at the time Switzerland's middle class was expanding which also allowed for an increase in retail banking business. Although the bank was largely unaffected by the 2008 financial crises, it did plead guilty to assisting its clients avoid taxes. 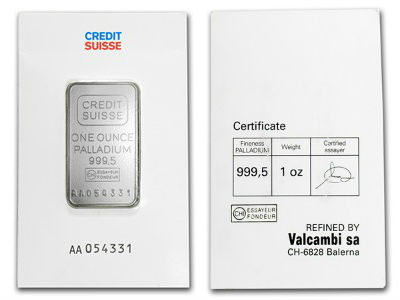 Both bars feature the Credit Suisse Logo at the top, with the bar's weight, fineness and serial number below. All Credit Suisse palladium bars have a fineness of 999.5.

Palladium is an interesting precious metals investment opportunity, as the metal has appreciated significantly over the last decade. Like platinum, it is much rarer than gold or silver, and its price can be significantly swayed by changes in the automotive industry, and political and economic changes in South Africa and Russia, which are the two main producers of the platinum group metal (PGM).