Bitcoin was a big winner this past week. The world’s most beloved or hated cryptocurrency began the week at $6,833 and ended up $7,266. That’s a gain of 6.3 percent for the week. Not bad, not bad at all.

The year has also been very kind to Bitcoin. The cryptocurrency is up 90 percent from the start of the year.

What was behind the run-up? Although no one person really knows what drives cryptocurrency prices (just as is the case with stocks, gold, or most other publicly traded assets), the most accurate speculation is probably the U.S.- China trade war. 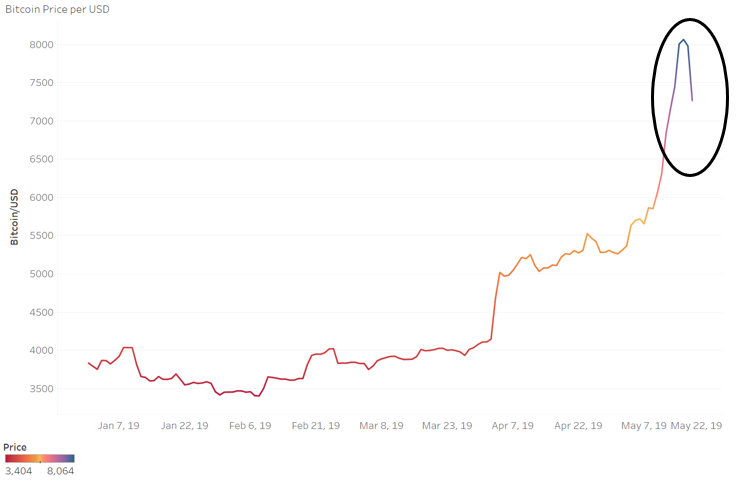 The Trade War
Simply speculating that the trade war jabs between U.S. President Donald Trump and Chinese President Xi Jinping is just speculation without evidence.  Unfortunately, reasons for buying and selling Bitcoin are not disclosed.  With that said, Google probably has a decent idea of what’s going on in the minds of those less concerned with privacy in their search habits.

The following is a look at the Google Trends data over the past year.  Mentions of the trade war last peaked around July 4th, 2018.  Smaller peaks trickled throughout the year, but nothing like what it looks like now.  After searches for a trade war bottomed during the week of April 28th through May 4th, searches for a trade war have exploded.  Interest is at its all-time high, maxed out at 100 (the dots represent incomplete data).

The Simultaneity Movements
The simultaneous movements of the price of Bitcoin and searches for a trade war is somewhat curious.  Typically, in times of heightened uncertainty, investors flock to safe assets, such as German bonds or U.S. Treasuries.  This time around Bitcoin seems to be the safe asset.  Could it really be the case that Bitcoin is now a AAA-rated asset?  The answer, of course, is no.  Bitcoin will probably never replace the U.S. dollar as the world’s safest form of financial wealth, but don’t tell the Chinese or American governments what happened this week. It might give them a double take.

Conclusion
Bitcoin is booming.  At the same time as the price of Bitcoin is booming, searches for a trade war are booming.  Simply happenstance?  Probably not.  Bitcoin holders have been big beneficiaries of trade war jabs between the U.S. and China.  It’s surprising to see investors view Bitcoin as a safe asset in times of trouble, but that’s exactly what we appear to be seeing.  The world is changing.